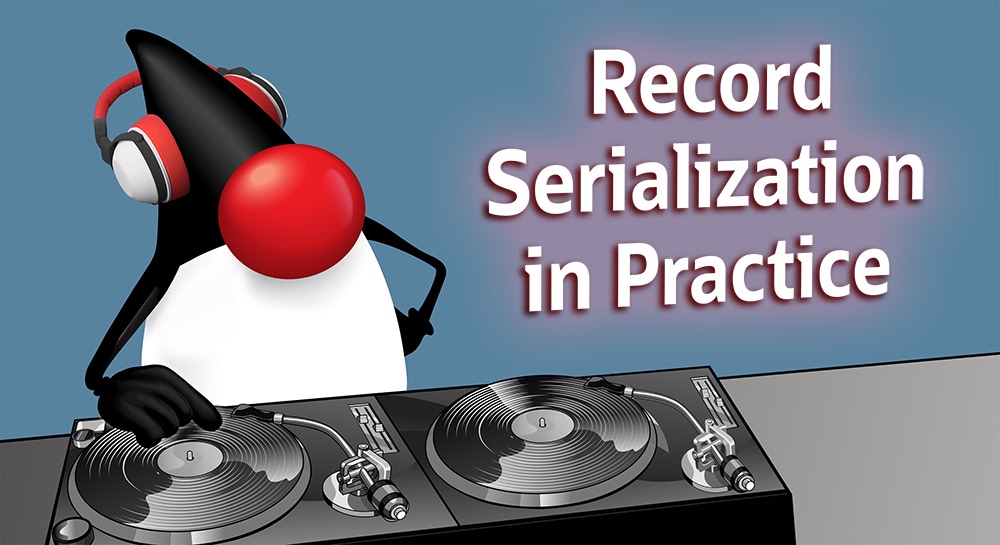 Serialization is the process of extracting an object’s state and translating it to a persistent format from which an equivalent object can be constructed. Record classes - now final in Java 16 - are semantically constraint classes whose design naturally fits the demands of serialization.

For normal Java classes, serialization can get very complicated very quickly, due to their freedom to model extensible behaviour and mutable state. Records in contrast keep things simple: They are plain data carriers that declare immutable state and provide an API to initialize and access that state. As an example, here’s the declaration of a Point record class:

From this design flows the uncomplex record serialization protocol that Java Object Serialization uses, which is based on two properties:

A record consists solely of its state, from which its serialized form is modeled without any customization. During serializing, the accessors are used to read that state before it is translated into the serialized form. During deserializing, the canonical constructor, whose parameters are known because they are identical to the state description, is called, which is the only way a record can be created.

Matters are more complicated for normal Java classes, and serialization frameworks like to use certain backdoor techniques to handle this complexity. For example, a common practice during serializing is to scrape private fields; this only works if Java language access control checks are suppressed. During deserializing, Core Reflection is typically used to set the private state of newly deserialized objects. Since JDK 15, this is no longer possible for record objects, not even with adequately privileged code (see this JIRA issue for more details). Instead, the only way to instantiate a record class is to invoke its canonical constructor.

Irrespective of this novel enforcement, there is really no need for intrusive reflective access and mutation. Record classes offer all the API points required for serialization by exposing their state and a means of reconstruction through well-specified methods - it would be a shame to not use them. Adopting a record-specific serialization protocol is an opportunity to make serialization frameworks more secure, more maintainable, and easier to use. We therefore embarked on an effort to help exisiting frameworks to support records adequately.

We engaged with three popular Java-based serialization frameworks in an effort to promote record serialization: Jackson, Kryo, and XStream.

Jackson was the first project we engaged with, in fact when we reached out in June 2020 a contributor was already working on record support. We helped with some review comments and suggestions before the code was integrated two months later. Around the same time, an issue was opened by a user for Kryo, which was the starting point for our engagement that resulted in a pull request (PR). For XStream, we created an issue and a subsequent PR shortly after that. Both PRs were successfully integrated in March 2021.

While each project comes with its own architecture and conventions, there are some common ingredients for supporting records that we would like to share.

The basic idea for supporting records is the same across the three frameworks: Implement a record-specific Serializer/Deserializer and integrate it into the existing project. With the help of a few utility methods that you can find here, the implementation can be completed fairly easily.

Looking at the implementation in more detail, an important aspect is JDK version compatability. The frameworks in question typically compile with the oldest JDK they support, so that at runtime any JDK that is equal to or higher than the compile version can be used. Records were first introduced as a preview feature in Java 14, so in order to avoid a static dependency on Java 14+, the presence of records has to be determined at runtime. For this, Java 14 added a specific method Class::isRecord, which returns true if the class is a record class, otherwise it returns false. If the method is not present, the Java runtime does not support records. Additionally, another method and a new type were introduced: Class::getRecordComponents, which returns an array of java.lang.reflect.RecordComponent objects that represents the record components of this record class. A RecordComponent provides information about, and dynamic access to, a record component, in particular its name and type (RecordComponent::getName, RecordComponent::getType).

These few primitives are the key ingredients to implement record serialization. For example, the instantiation of a record class during deserialization can look like this:

This code sample uses MethodHandles for the reflective calls (see the invoke package in the sample code). This is an implementation detail, the same can be achieved with Core Reflection (see the reflect package in the sample code). This being said, the method handle API in java.lang.invoke offers an interesting set of low-level operations for finding, adapting, combining, and invoking methods or setting fields, and can bring efficiency gains if used wisely.

Another interesting aspect is the ordering of the record component representations in the serialized form. One approach is to apply a specific order, an obvious choice being the order of components in the record declaration. The array returned by Class::getRecordComponents adheres to this order, so does the parameter list of the canonical constructor. Following this order, the values can be sequentially written to and read from the stream, and be passed directly to the canonical constructor.

However, what if a record class evolves over time, for example if we change the order of its components? During serialization, we can now no longer be certain of the component order, and the rather static approach described above would not be satisfactory. To support this type of record class evolution, we need to allow more flexibility of the serialized form. More precisely, the implementation must provide some kind of matching or sorting algorithm to correctly map the stream values to the parameter list of the canonical constructor. One option here is to sort the record components in the serialized form lexicographically by name (as done in Kryo’s solution). Ordering record components in the serialized form does not just support record type versioning, but is also in line with normal classes. This has the benefit that future transitions from normal classes to record classes are facilitated.

Moving from the implementation to the testing, the dependency on Java 14+ needs to be handled here, too. Test code has to be stored separately from tests that depend on older JDK versions and can only be compiled and executed if Java 14+ is present. Maven is used as build and dependency management tool by all three frameworks and its build profiles can be used to compile tests conditionally based on the detected JDK version. Depending on the existing build process, this configuration can be a little tricky but certain plugins can help setting the compilation and execution of source and test code. When working with Java 14 and 15, certain flags are needed to enable preview features, specifically --enable-preview. With Java 16, records are a final so this flag is no longer required.

Java records can add value to serialization frameworks. We showcased three frameworks that have successfully added record support and outlined their common recipe. With this, supporting records is far from difficult and - whether you are a framework developer or not - we hope you try it out.