Oracle is proud to announce the general availability of JDK 18. This release is the ninth Feature Release delivered on time through the six-month release cadence. This level of predictability allows developers to easily manage their adoption of innovation thanks to a steady stream of expected changes

Java’s ability to boost performance, stability, and security continues to make it the world’s most popular programming language.

Another important change announced six months ago was the introduction of a frictionless no-fee license which allows organizations to continue to use Oracle JDK 17 releases, including quarterly performance, stability, and security patches, at no cost. Starting with JDK 17, LTS releases will be made available under the new no-fee license for at least three years, allowing one full year of overlap with the next LTS release. Non-LTS releases, such as JDK 18 and its updates, will also be made available under the new license.

As with previous releases, with Java 18, we continue to celebrate the contributions from many individuals and organizations in the OpenJDK Community — we all build Java, together!

Instead of making tens of thousands of fixes and delivering close to one hundred JEPs (JDK Enhancement Proposals) every few years as we did with legacy “Major Releases”, enhancements are delivered in leaner “Feature Releases” on a more manageable, predictable six-month schedule. The changes range from significant new features to small enhancements to routine maintenance, bug fixes, and documentation improvements. Each change is represented in a single commit for a single issue in the JDK Bug System.

Of the 17,253 JIRA issues marked as fixed in Java 11 through Java 18 at the time of their GA, 12,442 were completed by people working for Oracle while 4,811 were contributed by individual developers and developers working for other organizations. JDK 18 delivers the most contributions in a release by Independent individual contributors. This demonstrates OpenJDK as a welcome place not only for organizations but contributors of all types bringing their unique skills into the Java community.

Going through the issues and collating the organization data from assignees results in the following chart of organizations sponsoring the development of contributions in Java: 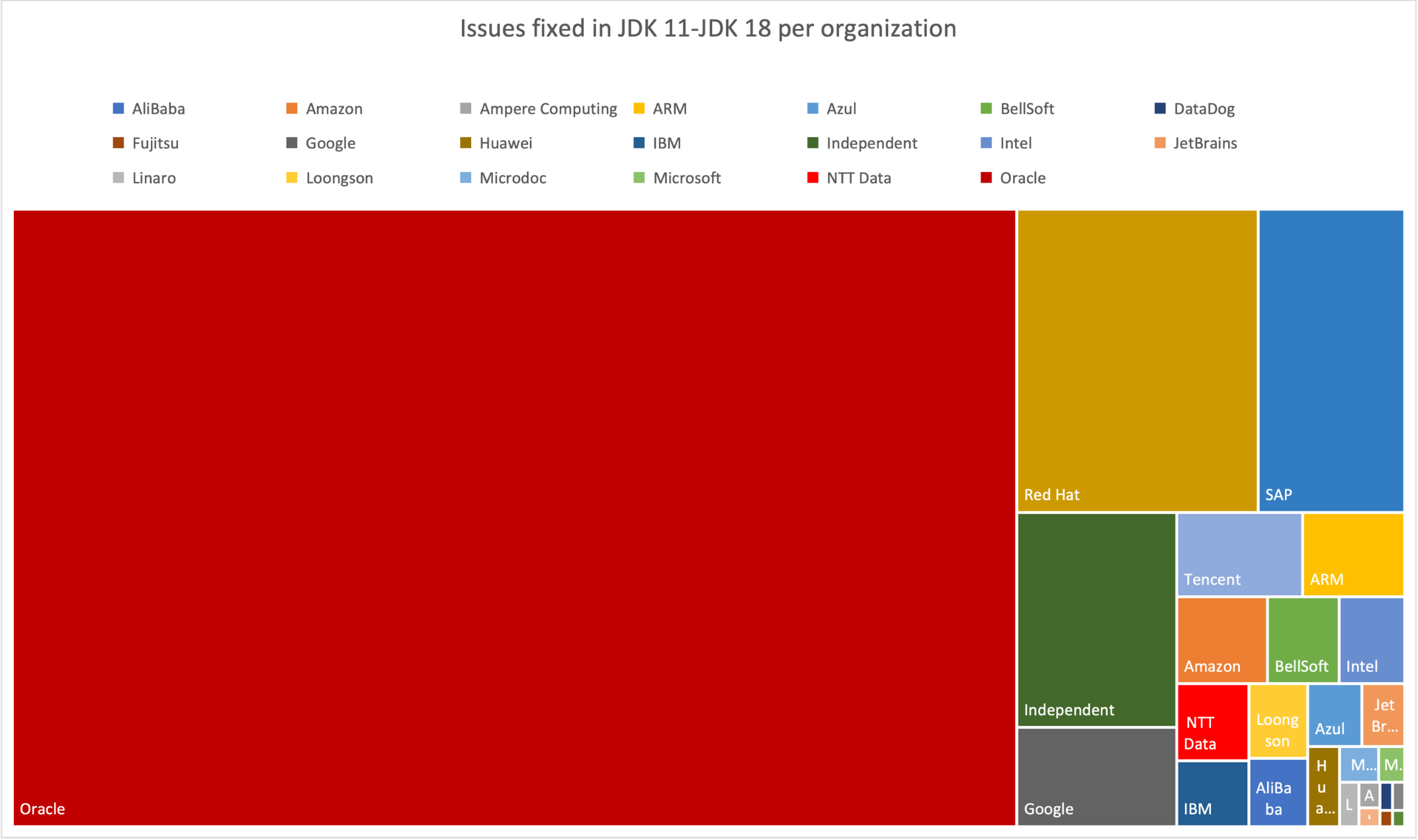 In Java 18, of the 2,062 JIRA issues marked as fixed, 1261 were completed by Oracle, while 801 were contributed by other members of the Java community including a record 168 from Independent individual contributors.:

Oracle would also like to thank the developers working for organizations like Alibaba, Amazon, ARM, Intel, JetBrains, Red Hat, SAP, and Tencent for their notable contributions. We are also thankful to see contributions from smaller organizations such as Bellsoft, DataDog, Loongson, and independent developers who collectively contributed 13% of the fixes in Java 18.

Additionally, through the Quality Outreach program we would like to thank the following FOSS (Free and Open Source) projects and individuals who provided excellent feedback on testing Java 18 early access builds to help improve the quality of the release.

Along with thousands of performance, stability and security updates, Java 18 delivers nine enhancements/changes (known as JDK Enhancement Proposals - JEPs), including two delivered in incubator modules and one preview language feature.

Incubator Modules allow putting non-final APIs and non-final tools in the hands of developers and users to gather feedback that will ultimately improve the quality of the Java platform.

Similarly, Preview Features, are fully specified and fully implemented Language or VM Features of the Java SE Platform; and yet impermanent. They are made available in JDK Feature Releases to allow for developer feedback based on real-world uses, before them becoming permanent in a future release. This also affords tool vendors the opportunity to work towards supporting features before they are finalized into the Java SE Standard.

The nine JEPs delivered with Java 18 are grouped into four categories:

An out-of-the-box static HTTP file server with easy setup and minimal functionality, reducing developer activation energy, making the JDK more approachable, and offering a default implementation via the command line together with a small API for programmatic creation and customization.

You can find out more about the Simple Web Server in the Inside Java podcast #22 with Julia Boes.

Reduces the maintenance and development cost of reflection support for future language features. It also simplifies the Hotspot VM code.

Facilitates the validation and formatting of source code fragments in API documentation. Although correctness is ultimately the responsibility of the author, enhanced support in javadoc and related tools can make it easier to achieve, enabling modern styling, such as syntax highlighting, as well as the automatic linkage of names to declarations, and enabling better Integrated Development Environment (IDE) support for creating and editing snippets.

An introduction video to the Code Snippets feature has been published by Nicolai Parlog in the Inside Java Newscast #20.

Introduces a platform-agnostic, reliable way of clearly and concisely expressing a wide range of vector computations for supported CPU architectures.

Prepares developers for the eventual future removal of the outdated `Finalization feature by providing simple tooling to help detect reliance on the deprecated functionality.

A discussion with Brent Christian regarding the effort to gradually deprecate the finalization feature from the platform, as well as the alternatives to properly deal with resources, is available in the Inside Java podcast #21.

Timely support for new features by tools and libraries helps drive developer productivity. With Java 18, we continue to welcome the efforts of leading IDE vendors whose most timely updates offer developers support for current Java versions. Developers can expect to take advantage of Java 18 support today with the following IDEs:

Java continues to be the #1 programming language for today’s technology trends. As the on-time delivery of improvements with Java 18 demonstrates, through continued thoughtful planning and ecosystem involvement, the Java platform is well-positioned for modern development and growth in the cloud.