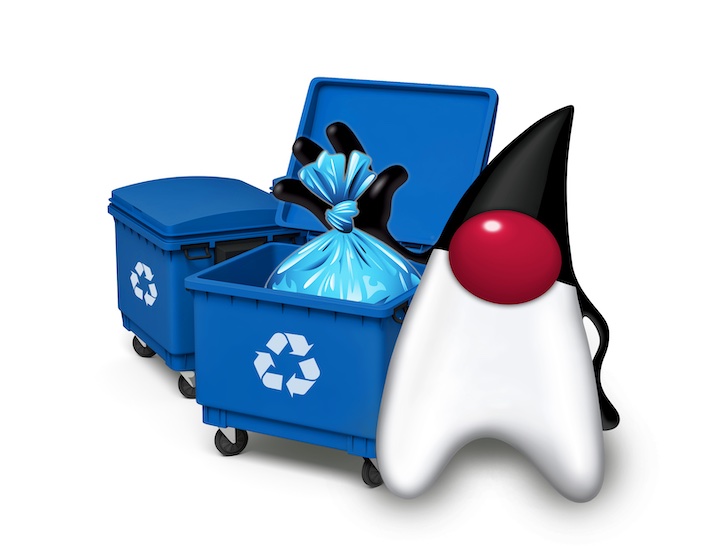 Cleaners were introduced in JDK 9 as a mechanism to call cleanup functions for heap objects that have security sensitive content or encapsulate non-heap resources. JEP 421: Deprecate Finalization for Removal describes the rationale for replacing finalizers and alternatives for developers. As JEP 421 moves forward, the adoption of Cleaner as a convenient alternative to finalization is getting more interest from developers. These examples show several ways to use cleanup functions to replace finalizers.

I’ll use italics to refer to instances including object O, cleanup function F, Cleaner C, and Cleanable A to help keep track of what’s what.

Due of the close relationship between the object O, the cleanup function F, and the Cleaner, there are several potential coding pitfalls to watch out for. A concrete example illustrates how to write a cleanup function to take advantage of the garbage collector as it reclaims objects.

The class SensitiveData holds data that should be erased when it is no longer in active use. The data is erased in a cleanup function (initially using a lambda) by clearing the internal char array. It is called either by the close method or by the Cleaner when its instances become unreachable. SensitiveData implements AutoCloseable to encourage its use within try-with-resources promoting the idea that cleanup should occur as early as possible.

In un-structured contexts, where try-with-resources is not suitable, the close method should be called directly. The Cleaner serves as a fallback when a SensitiveData object is no longer referenced and the cleanup has not been called by the close method.

A brief example showing SensitiveData used with try-with-resources and the clearing of temporary arrays to minimize the time the sensitive data is visible in process memory.

Let’s take a closer look as the pros and cons of various cleanup function coding choices. Each of these expose a FunctionalInterface method with no arguments that performs the cleanup using only values it holds itself.

For simple cleanup, a lambda is the concise and can be coded in-line in a constructor. It is easy to code but it may be hard to spot mistakes and verify that it is working as expected. For example, if chars is a field, the lambda could refer to this.chars inadvertently capturing this. Unless there were tests written to check that it was cleared, you might not notice that the the object is not collected and the cleanup does not occur.

One way to ensure that this is not captured is to create the lambda in a static method. Its scope does not have this so it cannot accidentally be captured.

A cleanup function as record, nested, or top level class

A record class, nested static class, or top level class is the most robust way to write a successful cleanup function. It provides good visibility into the separation of the state that is independent of the object and provides a place to document the cleanup.

Do not be tempted to make the cleanup function an inner class, it implicitly refers to this and the cleanup will not be run.

Though in most cases the record or nested class fields are immutable, there are use cases where the state needed for cleanup is changed during the normal use of the object O and therefore needs to be mutable. Holding the mutable state in an object accessible to both object O and the cleanup function F is a straight-forward way to handle this case. If multiple threads are modifying the state, they will need to have some kind of synchronization. When a Cleaner is shared among different uses, and synchronization is needed for the state, the cleanup function might block the Cleaner thread. As with any synchronization, check carefully that the synchronization does not result in deadlock or delay in the cleanup. For example, if the cleanup involved closing a network connection, it would be prudent to fork off a task independent of the Cleaner thread.

The most lightweight cleanup function can, with careful attention to detail, be a lambda. The lambda must not refer to this implicitly or explicitly. The lambda body cannot refer to fields in the constructor. This is more restrictive than the usual allowance to use final or effectively final values.

Converting to cleanup functions from finalizers may require a bit of refactoring to separate out the state. The refactoring can improve the structure and reliability of the class.

The complete example with the various options is available from SensitiveData.java.